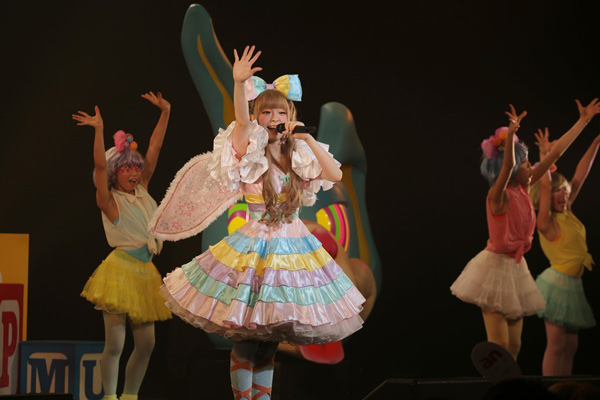 On July 2nd, Kyary Pamyu Pamyu wrapped up the final performance of her nationwide, one-man "Pamyu Pamyu Revolution Tour" with a live performance at Shibuya-AX.

The tour spanned seven cities and nine separate concerts, drawing in approximately 10,000 people. The incredible 'Pamyu Pamyu Land' sets for the show were designed by her friend and owner of the Harajuku brand 6%DOKIDOKI Masuda Sebastian, and were designed to give off the same amusement-park-like feel of her first full album "Pamyu Pamyu Revolution". On both sides of the stage were deranged-looking pink and blue rabbits, with a gigantic silk hat in the middle surrounded by cute and colorful toy boxes.

Kyary, dressed as the 'leader' of Pamyu Pamyu Land, kicked off the show, dressed in cute spangled shorts and a bizarre outfit with pandas attached, to the tune of her first album's intro track, "Pamyu Pamyu Revolution". She greeted the crowed, "Hello, I'm Kyary Pamyu Pamyu! Thanks for gathering, so many people here even though it's a weekday!" causing the audience to shriek with excitement. "Today, I'm gonna sing a bunch!"

After her kid dancers showed off their amazingly sharp choreography, the cute singer returned in an adorable, angel-like costume with wings attached, earning cries of "Cuuuute!" from all over the crowd. She then performed her song "Onedari 44 ?" before stopping for a short MC break, in which she revealed stories from her visit to Los Angeles for Rune Boutique last December. 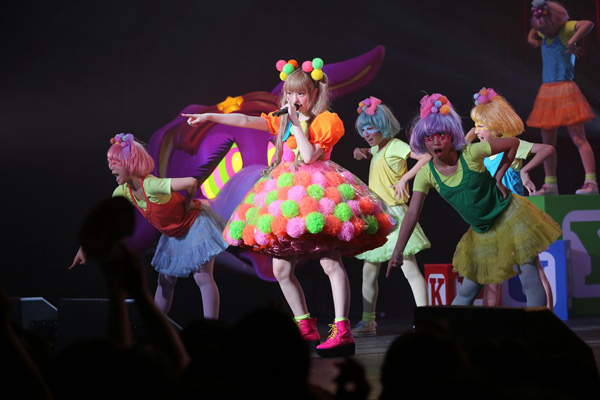 Kyary then continued the concert with a short dance break, making her way back onto the stage in a colorful outfit decorated in bright pompoms. The skirt was constructed using approximately 100 sponges, and was created by Kyary in collaboration with her stylist.

The set list for her live performance spanned seventeen songs, including her debut song "PONPONPON", her second single "CANDY CANDY", CM song for 'an' "Kyary ANAN", and even some capsule covers. Having exhausted her discography, the singer gave a short speech to her fans during the encore, moving the audience - which included her mom - to tears.

"Not even a year has passed since I made my debut, so I was nervous about whether people would come. But the Kyary Kid Dancers, my staff, Mr. Nakata of capsule, Mr. Masuda, and all of my fans have been there for me, and I was able to reach the end of my tour without a single hitch. It's thanks to all of you that it's been decided, I'll be performing at Budokan! Thank you so much," she said, tears overflowing.

Check out photos and the concert set list below!

misono celebrates 10th anniversary with a special event in Okinawa