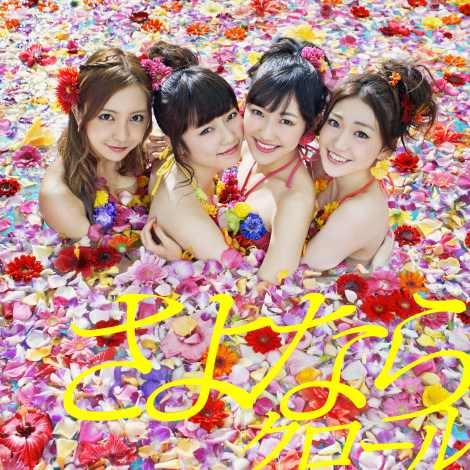 Popular idol group AKB48's 31st single "Sayonara Crawl" (released on May 22nd) sold 109,000 copies in the second week, and the cumulative sales number for the single reached 1,872,000 copies.
It exceeded the previous best record for a female group's single sales --1,845,000 copies-- which SPEED had kept for over 15 years with "WHITE LOVE" (released in October 1997).
Until now, AKB48's best selling single was their 26th single "Manatsu no Sounds good!" which sold 1,822,000 copies cumulatively, but they were able to exceed it with the latest single in the second week! Moreover, "Sayonara Crawl" is also the best selling single for the first week release, which sold 1,763,000 copies. It's also the record holder for both male and female artists.
AKB48 had swept 6 singles categories for a female group, which included "total number of chart topping singles", "the number of consecutive chart topping singles", "total number of million-selling singles", "the number of consecutive million-selling singles", "total sales number for all singles", and "sales number for the first week."
And with their latest single, they added one more notch to their belt, "the cumulative sales for a single" category.
Source & Image: Oricon
Share this article
Facebook
Twitter
24 16,950 Share Be the first to vote