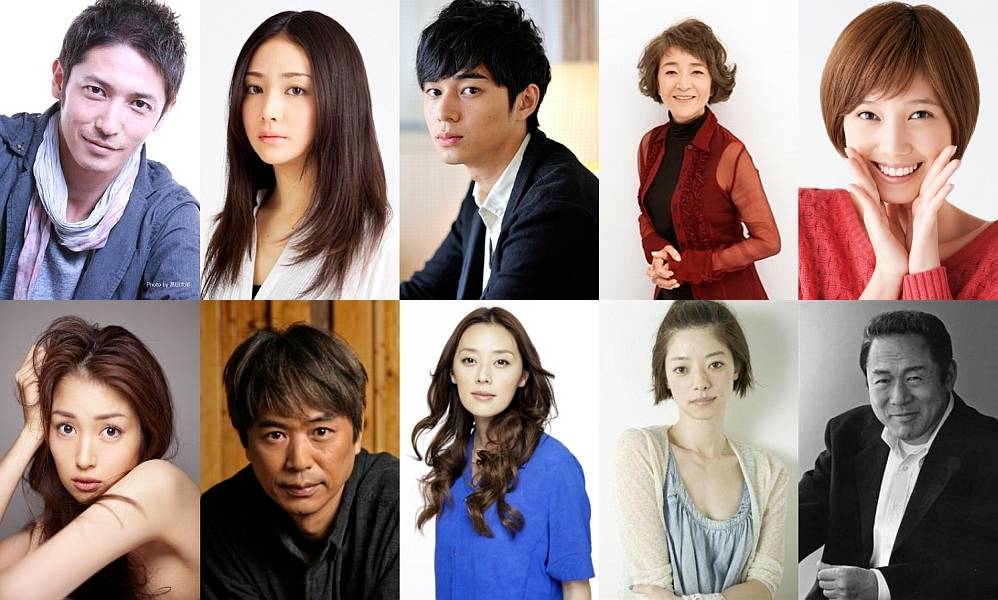 by HPriest
The ensemble cast of 10 actors for the upcoming romantic movie 'Subete wa Kimi ni Aeta Kara' was revealed the other day.

There are a total of six stories titled "Eve no Koibito", "Enkyori Renai", "Christmas Present", "Nibun no Ichi Seijin Shiki", "Christmas no Yuuki", and "Okurete Kita Present". All of the stories are set at Tokyo Station and take place just before Christmas. The different characters range from a company president who distrusts human beings, to a train driver who just received the shocking diagnosis that he has only half a yea left to live.

Here are the outlines of the different stories:

# "Eve no Koibito" ('Christmas Eve Lover')
- A company president (Tamaki) meets a woman (Takanashi), who just lost a beloved person, in a restaurant at Tokyo Station. He thinks that all women only like his money and enjoys being alone. She originally moved to Tokyo to become an actress, but now she is planning to go back to her hometown right after her short play at an orphanage.

# "Enkyori Renai" ('Long Distance Relationship')
- A love-dovey couple that is going through a long distance relationship. She (Kimura) is an aspiring fashion designer in Tokyo and he (Higashide) is a construction worker in Sendai. Will their hectic schedules allow them to at least meet each other on Christmas?

# "Christmas Present"
- Ichikawa plays a woman who works in an orphanage. That day she is waiting for the new mother of the 7-year-old Akane to come and pick her up.

# "Nibun no Ichi Seijin Shiki" ('A Half Coming-Of-Age Ceremony')
- A train driver (Tokito) who cannot bring himself to tell his son that he only has half a year left to live. The train driver's wife is played by Otsuka.

# "Christmas no Yuuki" ('Christmas Courage')
- A part-timer (Honda) at a cake shop has a crush on her senior at work, but she lacks the courage to approach him.

# "Okurete Kita Present" ('Belated Present')
- The owner of the cake shop at Tokyo Station (Baisho) gets reminded of a promise that she made with a certain someone (Kobayashi) 49 years ago.

most of it are interesting. where would this be aired?

It's interesting and Tamaki is there so YEAY!!!! XD

Yay Tamaki Hiroshi in a new movie <3 the movie sounds good, I really like "Love Actually" so I can't wait to watch this one!

"A Half Coming-of-Age Ceremony" looks really good..I wonder who will be in that one! This looks great~

More Masahiro Higashide ! I WANT, this guy is the new hottest man in Japan

i would totally love this movie

Anyway. I'm excited for the film.

YES !! Thank you so much translating :D ! can't wait to see Rin in this film , i love the sound of her story x thank you