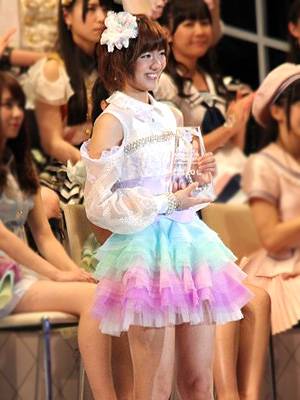 Miyazawa transferred to SNH48 last year, however, due to a visa related issue, she has never had a chance to perform on the local stage yet.

Back in April during AKB group's concert at Nippon Budokan, it was announced that she would hold a concurrent post in team K of AKB48. At that time, Miyazawa revealed her feelings on her blog, "I felt frustrated and ashamed to return to AKB48, when I haven't learned Chinese, nor have actually lived there, without any improvement."

She then announced on the stage of "AKB48 32nd single Senbatsu General Election" which she was ranked in the 10th place, that she wanted to focus on SNH48. Miyazawa also explained on her blog about her decision, "I've found something I want to do in Shanghai. When I achieve it, I would like to graduate SNH48, and return to AKB48."

Sword Art Online wraps up the epic Alicization arc in the season finale to air this Saturday
14 days ago   6   2,086