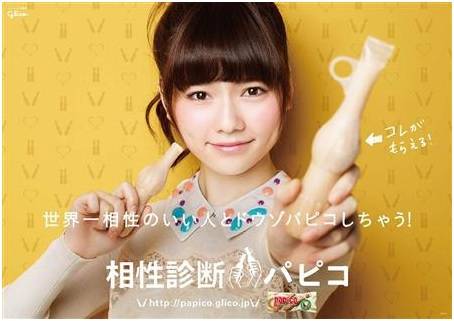 On July 16, it was announced that AKB48's Shimazaki Haruka (19) new starring CM for Glico's ice-cream "Papico" will air starting on July 22.

The CM for the ice-cream, which is sold in pairs, features a smiling Shimazaki who says, "I would like to share the 'Papico' with a person who is compatible with me."  Currently, the product's official site features a game entitled "AKB48 to Aishou Shindan Papico" (Compatibility diagnosis game with AKB48) in which 12 members of AKB48 including Shimazaki are featured.

On the site, users answer 10 questions, and it tells what number in the world they are compatible with a member. The person who comes out to be the most compatible with a certain member, will be able to receive one of the Papico pairs from the member. (On the site, you can check the compatibility with Kitahara Rie.)