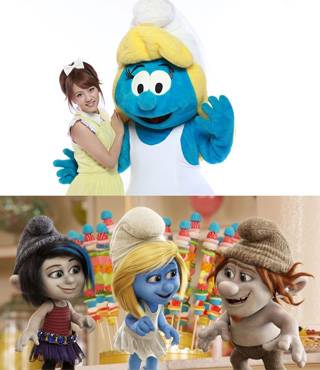 As previously announced, AKB48 member Takahashi Minami will lend her voice for the Japanese dubbed version of "The Smurfs 2". To follow up on the news, it was recently revealed that she will also be singing the theme song for its Japan release.

The title of the theme song is "Hitomi no Tobira", and it is written by AKB48's general producer Akimoto Yasushi. It is said to be a summer-like song with the refreshing acoustic guitar sound.
The song will be included in Takahashi's 2nd solo single as a coupling song, and it is scheduled for release sometime in this fall.

Takahashi said, "I am truly happy to be able to sing the theme song for the Japan release, in addition to voicing for Smurfette. It is a bright song that matches well with 'The Smurfs 2', so I want everyone to sing together, and have fun!"

Prior to the release of the movie, it will also be available as a Chaku-Uta ringtone starting on July 28th.

"The Smurfs 2" is set to open in theaters in Japan on August 16th.