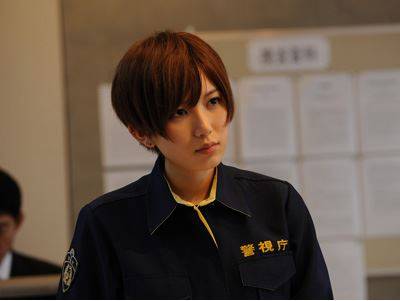 Former AKB48 member Mitsumune Kaoru will be making her comeback as an actress in the upcoming movie, 'ATARU?THE FIRST LOVE & THE LAST KILL?'.

Mitsumune will reprise her role of 'Ishikawa Yui', a staff of the Criminal Identification Division. She reflected, "Since this was my first 'ATARU' set in a year, I was very nervous. Previously during filming for the 'ATARU' tv drama, I was so nervous that I forgot all my lines. [This time] I was nervous that I almost remembered how I felt at that time."

Mitsumune withdrew from AKB48 in October of last year due to her poor health condition. Since then, she had taken a step back from the spotlight. She was unable to participate in the 'ATARU' special drama earlier in January due to her poor health. As this was her first 'ATARU' set in a year, she was warmly welcomed by the staff.

"I thought that the atmosphere on set would change, but in a good way, nothing had changed. The cast and staff were all warm, and I felt that they really take care of me. Because the set had such a good atmosphere, I think I was able to play my role as before," Mitsumune said. The movie will also star her senpai from her AKB48 days, Shimazaki Haruka.

She also expressed, "Through work, I was able to see a different world I didn't know about. From now on, I want to peek into things I want to do and different worlds that I'm interested in, and make many discoveries."

'ATARU?THE FIRST LOVE & THE LAST KILL?' will open in theaters on September 14.