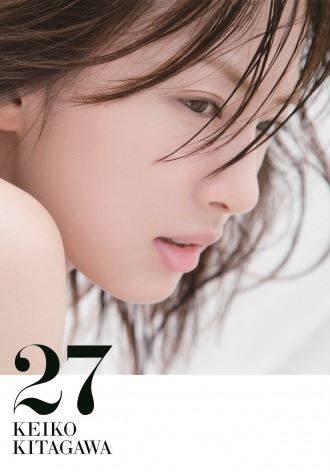 Actress Kitagawa Keiko (26) will be releasing her 1st photo book, '27', on her 27th birthday, August 22. To commemorate its release, she will be holding her first handshake events on August 24 and 25th in Tokyo and Osaka respectively.

Kitagawa expressed her joy, saying, "I am very much looking forward to my first handshake events. Until now, I haven't had many opportunities to directly come in contact with my fans, so I am very excited." She continued, "I hope to have a good time while expressing my gratitude toward my fans who have supported me. I will also visit my hometown Kansai, so I am looking forward to it. I want to talk to as many people as possible as long as time allows."

The photo book will commemorate the 10th anniversary since her debut. Shot in Paris, France, and Tokyo, it includes many photos of the actress with expressions that we usually don't see. She introduced it, saying, "At the studio in Tokyo, I had my pictures taken without makeup, and it was a very fresh experience. I want people to take notice of that."

The photo book also features a long interview where she talks about her experience with the Hanshin-Awaji Earthquake, the reason for her debut, her worries, turning points, and even her views on marriage.

Kitagawa has several movies lined up for release; 'Nazotoki was Dinner no Ato de' on August 3, 'Roommate' on November 9, 'Judge!' in January 2014, and both 'Dakishimetai' and 'Akumu-chan The Movie' sometime next year.