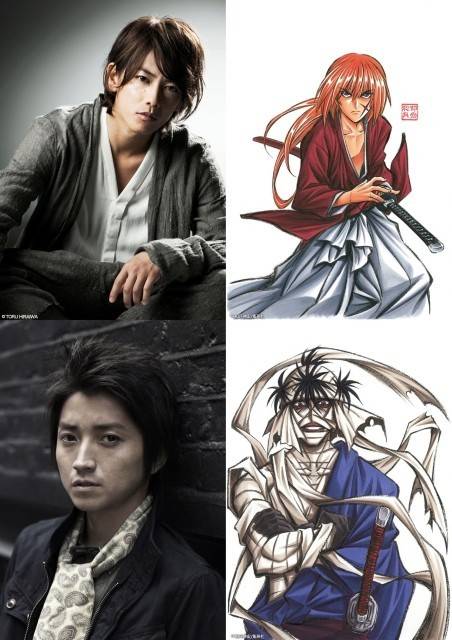 "Rurouni Kenshin", which is a live-action adaptation of Watsuki Nobuhiro's popular manga, will be getting two sequels. Sato Takeru will continue to star in the sequels, and it will once again be directed by Otomo Keishi.

The sequels will be titled "Kyoto Taika-hen (first part)" and "Densetsu no Saigo-hen (last part)", and both will be released successively.

The sequels will be based on the "Kyoto Arc" of the original manga, and it will depict the fierce battles between the protagonist "Himura Kenshin" (Sato) and his powerful enemies who attempt to gain control in Japan. It's already been revealed that Fujiwara Tatsuya will be playing Kenshin's old enemy, "Shishio Makoto", which is one of the most popular characters among the fans. This will be the first time that Sato and Fujiwara will be co-starring with each other.

At this moment, the villains, other than the "Shishio Makoto", have not been revealed, but it's reported that Kenshin will also confront characters like "Seta Sojiro" and "Shinomori Aoshi."

Takei Emi (as "Kamiya Kaoru"), Aoi Yu (as "Takani Megumi"), Aoki Munetaka (as "Sagara Sanosuke"), and Eguchi Yosuke (as "Saito Hajime"), who appeared in the previous film, will continue to participate in the sequels.

Reportedly, the filming will mainly be held in the suburbs of Kanto and in Kyoto, and Sato is currently devoting himself to sword and horseback riding lessons.

Sato commented, "I feel tense because of the happiness of being able to play Kenshin once again, and the pressure that I will have to get over even bigger hurdles. It would be pointless if we can't make a better film than the previous one. Also, we would be unqualified to make this film adaptation unless it would be something the fans of the original can accept. I will just trust director and play my role as Kenshin sincerely while respecting the original. I also want to challenge myself to the scaled-up action scenes which exceed the previous one."