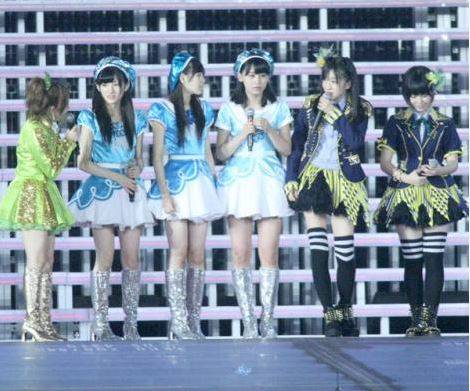 On July 20th, AKB48 held the first day of their 5 major dome tour at Fukuoka Yafuoku! Dome, where they made a surprise announcement of the formation of a new Kenkyuusei unit.Ā

On this day, SKE48's Kitagawa and NMB48's Shibuya were absent because the concert was held in Fukuoka. When the group's general manager Togasaki Tomonobu made the announcement, the 5 members stood still in amazement. Tashima, who was given the microphone, called out to Sashihara RinoĀ(20), "Sashiko-chan, what should I do!" In response, she made the crowd laugh with, "Go home, go home! I don't know anything either."Ā

Okada expressed, "I heard this for the first time, but my name is Nana and it's a 7-member unit. So I think it's fate." The unit will perform for the first time during AKB48's upcoming Sapporo Dome concert on the 31st.