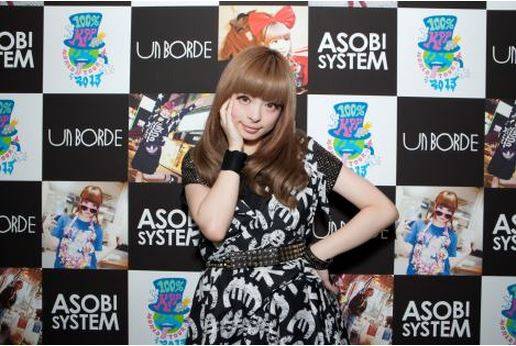 During this event, it was announced that Kyary would be holding her first arena concert on January 18 and 19th of next year at Yokohama Arena. She expressed, "A one-man live at a big venue like Yokohama Arena. I am already overflowing with excitement! Since it's a large venue, the range of how I will be viewed will be widened, so I want to express Kyary world more than ever before. Everyone, please look forward to it!"

Kyary's first movie, which had a 1 day only special screening, is a live documentary of her world tour, '100%KPP WORLD TOUR 2013', which was held from February to May. She stopped in 8 countries for 19 shows, which attracted 28,000 people.

In association with her world tour, Kyary attended the event wearing a dress with different currencies printed on it. "After finishing the world tour, I gained confidence and felt like I was moving onto the 2nd stage," she said.

For this special screening, 1,500 people who purchased Kyary's 2nd album, "Nanda Collection" (released in June), were invited from a lottery to theaters at 8 different locations across Japan (Tokyo, Aichi, Osaka, Hokkaido, Miyagi, Kanagawa, Hiroshima, and Fukuoka).