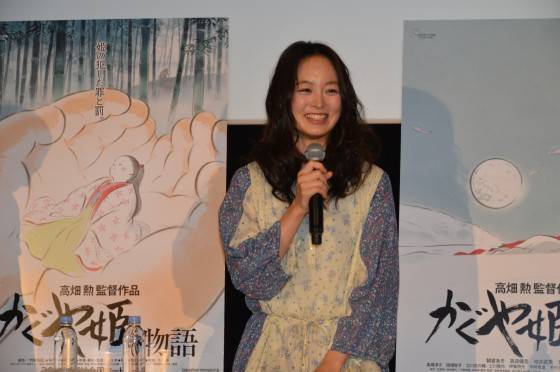 On September 17th, Studio Ghibli held a press conference to report on their upcoming anime film "Kaguya-hime no Monogatari", and announced that actress Asakura Aki has been chosen to voice for the protagonist "Kaguya-hime".

This will mark Asakura's first time voice acting. Looking back the audition, she said, "It was quite bad...at the moment I did the acting, I thought I failed, so I cried while going back. However, director Takahata told me later that he liked the way I expressed sorrow."

She was enthusiastic saying, "I've been watching Ghibli since my childhood. I am happy to be able to be a part of Ghibli which many people are looking forward to. Since this is a rare experience, I decided to put my all into it."

"Kaguya-hime no Monogatari" is Takahata Isao's first movie in 14 years since "Hohokekyo Tonari no Yamada-kun"("My Neighbors the Yamadas") and is based on "Taketori Monogatari", which is considered the oldest existing Japanese narrative. It depicts the feeling of Kaguya-hime and her mysterious destiny.

"Kaguya-hime no Monogatari" is scheduled for release on November 23rd.