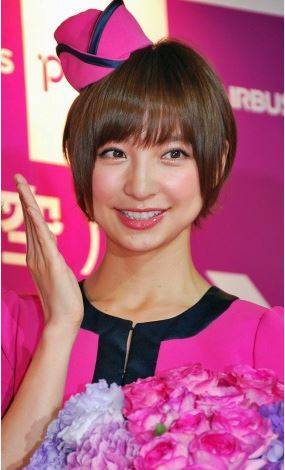 On September 28th, former AKB48 member Shinoda Mariko appeared at a press conference before the fashion and music event 'Girls Award2013Autumn/Winter' where she announced that she has become an authorized cabin attendant for the low-cost carrier (LCC) 'Peach'.

A plane with Shinoda's picture will be introduced on October 27th. On the same day, she will board the plane as part of the cabin crew on the 7:10 am flight from Kansai Airport to Narita Airport. "I'm nervous, but it's rare to have my picture fly in the air so I want to enjoy it," she commented. She also shared that she will practice her in-flight announcements, "I want to attend the customers and give them high fives."

Shinoda appeared at the event wearing an outfit she designed herself. She gave its appeal saying, "It's shows the sexiness of the back view of CAs." It's been over 2 months since Shinoda graduated from AKB48, "I'm now able to take one day off a week, so I can concentrate on various things like designing."