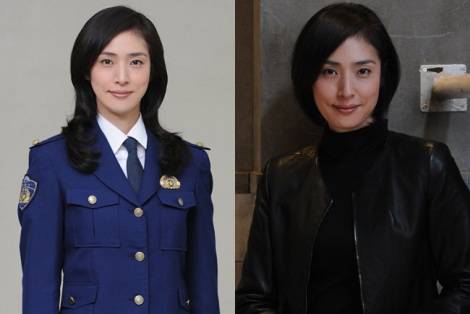 On October 28, it was revealed that Amami Yuki will be starring in TV Asahi's new drama "Kinkyu Torishirabeshitsu" that is scheduled to air starting in January.

Amami who cut 20 cm of her hair first time in 10 years for the drama, will be playing as a detective.

"Kinkyu Torishirabeshitsu" is an original story written by a scriptwriter Inoue Yumiko ("GOOD LUCK!!", "Shiroi Kyoto", "14-sai no Haha"), and it's a new type of detective drama which takes place in the interrogation room.

The protagonist named "Makabe Yukiko" (Amami) is a female detective. She's helped crack various cases, and worked her way up to her position of being the first female chief on the Special Investigation Team of the Tokyo Metropolitan Police Department. However, she assumes full responsibility for the mismanagement in a certain case, and is ordered to transfer to a special team in crime squad 1 of the Tokyo Metropolitan Police Department, called, "Kinkyu Jian Torishirabe Taio-han (Urgent case investigation correspondence squad)" --commonly called as 'Kintori'-- which is the team that interrogates suspects.

Makabe seeks the truth behind the cases, and eventually, she unveils a "shocking fact" in an unsolved case from the past.

Other "Kintori" members include Tanaka Tetsushi, Kohinata Fumiyo, Osugi Ren, and Denden. Hayami Mokomichi and Suzuki Kosuke will play detectives in crime squad 1 who have hostility toward the 'Kintori' team. Sasai Eisuke and Kusakari Masao will also be appearing in the drama.

"Kinkyu Torishirabeshitsu" will air every Thursday at 9:00 pm on TV Asahi.