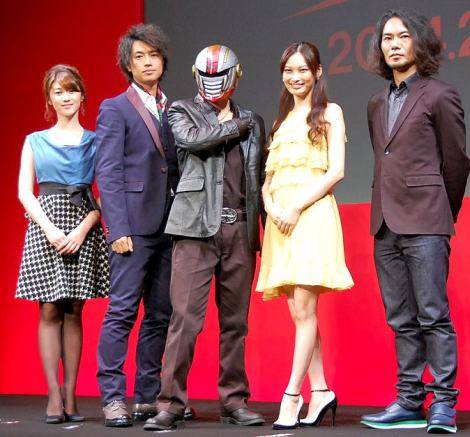 On October 15, it was announced that Kis-My-Ft2 member Fujigaya Taisuke is starring in the upcoming movie "Gekijouban Kamen Teacher" (to be released on February 22nd 2014), and Fujigaya along with other cast members attended the press conference. This will mark the first starring movie for Fujigaya.


This is a live-action film adaptation of Fujisawa Toru's popular manga. It's a story of school life that features a mysterious masked teacher who is good at managing motorcycle. He is a special teacher who is allowed to use his fist to reform the students.
This film adaptation will also feature a confrontation between the protagonist and his old beloved teacher (played by Endo Kenichi).

Fujigaya also starred in its live-action drama adaptation which was aired on NTV during July ~ September of this year.

"Of course I was happy that this was my first starring movie, but I was happier that I would be able to show the work's worldview and message on a big screen. I hope it will be the work which could change the viewers' lives. Please look forward to seeing it." Fujigaya said.