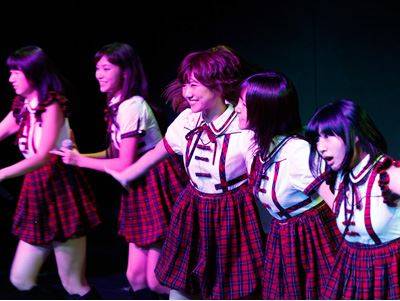 On October 11, Miyazawa Sae and Suzuki Mariya stood on SNH48's stage and performed in front of local fans for the first time. The two transferred to SNH48 last year, but their stage debut was pushed back due to circumstances with their work visa

SNH48 performed all 16 songs from AKB48's 'Saishuu Bell ga Naru' stage as well as "Heavy Rotation" with Chinese lyrics. When Miyazawa and Suzuki introduced themselves in Chinese, the fans welcomed them by holding up name plates saying, "Sae-chan" and "Mariyannu". There were also fans from Japan to support the girls.

Miyazawa performed the unit song "Gomen ne Jewel", and Suzuki also sang "Oshibe to Meshibe to Yoru no Chouchou". During the encore, the crowd called out, "Sae-chan! Mariya!" After hearing this, Miyazawa reappeared on stage and took center for "Heavy Rotation".

The two will appear in SNH48's 1st anniversary special performance on the 13th. They are also scheduled to perform in a concert on November 16.