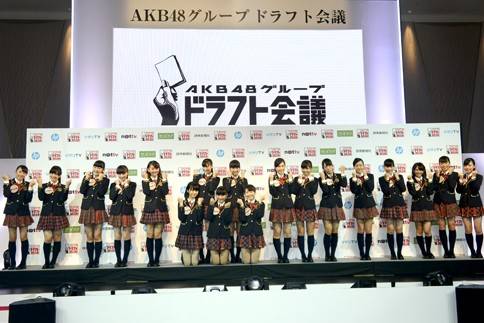 On November 10, 20 girls among 29 candidates were drafted into the AKB48 group at the "AKB48 Group Draft Kaigi", held at the Grand Prince Hotel New Takanawa,

After all the draft ended, the general director of the whole AKB48 group, Takahashi Minami told the candidates, "I'm grateful to be able to encounter with these shiny candidates. Since this is a new system, we are not sure what would happen, but we would like to be the help for the girls' dreams. To those who did not get drafted, I hope you guys to continue walking your ways without giving up, and to those who were chosen, please do not slip into complacency, as this is just your starting line."

Regarding the 9 girls who did not get drafted, Togasaki Tomonobu, the general manager of the AKB48 group, revealed that if they take audition for AKB48 group in the future, they will be able to skip primary examinations to the final judgement.

Below are the candidates drafted into each team of the AKB48 group. (in the order of each round.)