AKB48 reveals the very long title for their upcoming single 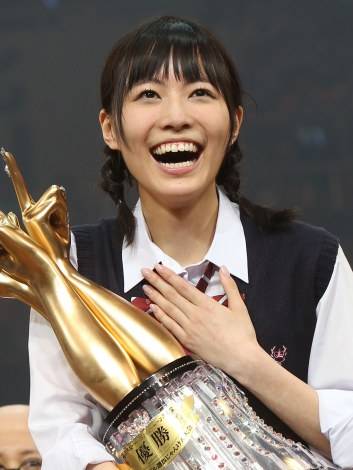 The title of AKB48's upcoming 34th single featuring the 16 winners of the group's '4th Janken tournament' has been revealed!

The title is "Suzukake no Ki no Michi de 'Kimi no Hohoemi wo Yume ni Miru' to Itteshimattara Bokutachi no Kankei wa Dou Kawatteshimaunoka, Bokunari ni Nannichi ka Kangaeta Ue deno Yaya Kihazukashii Ketsuron no youna Mono." (Lit. "Little embarrassing conclusion kind of thing I came up with after several days of consideration how our relationship would change if I tell you 'I see your smile in my dream' on the road of Platanus.")

Obviously, this is the longest title ever for AKB48's songs.


The reason of making the title this long, the general producer Akimoto Yasushi explained, "That is because I felt 'something I can't describe with one word', when I was making the song while imagining the Janken Senbatsu members. The 'something' could be the glitter of the girls' youth, or their mysteriousness, or maybe the earnestness of the girls running with full effort toward the dream as whole AKB group. I made the title as if I just scrawled those things."

The song is composed by Oda Tetsuro. Though he has provided songs for AKB48 which include "Hashire! Penguin" and "Kimi no Koto ga Suki dakara", this is the first time for him to provide the title track for the group's single. Reportedly, the song is cheerful idol song that contains a call & response.

Regarding the title, Matsui Jurina who will be the center for this single, said, "I was surprised since it's the longest title ever even in the whole groups, but it would be fun the title becomes a hot topic. I would like to have a talk with the fans about the title at handshake events."