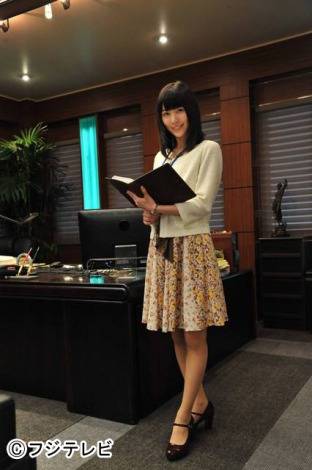 As we reported previously, Ohno Satoshi's starring drama "Kagi no Kakatta Heya" will air as a special drama on January 3rd, and recently, it was announced that SKE48 member Matsui Jurina will be making an appearance in the drama.

Matsui's role will be of a 21-year-old secretary of the shrewd lawyer "Serizawa" (played by Sato Koichi).
Matsui, after attending the filming with Ohno, Sato and Toda Erika, revealed, "There were words that I, as a 16 years old girl, usually do not use, so it was little difficult, and I was nervous at first." However, despite the challenges with her filming, it seems she was able to enjoy herself on set with her charming nature, winning over the hearts of co-stars and the staff members by challenging them to Janken. She said, "Because of that, I was able to relax. I hope everyone will watch it for the New Year together with their families."

"Kagi no Kakatta Heya SP" is a sequel to the drama series which aired during April ~ June of last year. It is a puzzling mystery in which a protagonist named "Enomoto Kei" (Ohno), who is obsessed with keys and locks, solves mysterious cases happening behind closed doors together with two lawyers played by Sato and Toda.

Other than Matsui, Fujiki Naohito (as a popular modern artist), Kuroki Hitomi (as a niece of a chairman of a stock company), Sano Shiro (as a curator of a museum), and Okada Yoshinori (as a caretaker of an apartment) will also appearing in the drama.