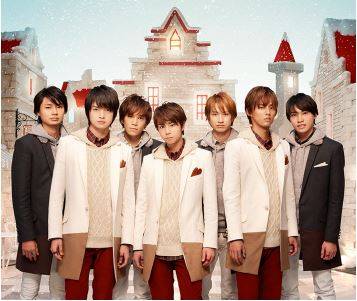 The DVD will highlight the Tokyo Dome concert from their dome tour 'Kis-My-Ft2 SNOW DOME no Yakusoku' which was held on November 16th. The live kicked off with their single "SNOW DOME no Yakusoku", continued by an elaborately designed stage and even performances by their new unit Busaiku comprised of members Yokoo Wataru, Miyata Toshiya, Nikaido Takashi, and Senga Kento.

There will be a total of 30 songs over a span of 130 minutes. The limited edition will come with a bonus DVD and live photo book containing live footage and off-shot from 'Good Live Tour Ikuze!' held in July at Yokohama Arena.

Kis-My-Ft2 will also release a new single (currently untitled) in spring 2014. One of the tracks off the single called "Hikari no Signal" was written by Tokyo Karakoron's Sensei (Vo, Key), and it will be used as the theme song for the upcoming film 'Doraemon The Movie: Shin Nobita no Dai Makyou ~Peko to 5-nin no Taikentai~' due out on March 8th. More details on the single will be revealed at a later date so stay tuned!