AKB48 announces the creation of 'Team 8' with a new concept 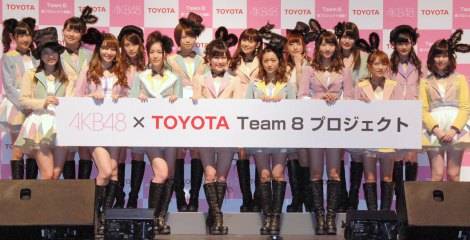 On January 23, AKB48 announced the creation of their 5th team "Team 8." The announcement was made at a press conference held right before "AKB48 Request Hour Set List Best 200 2014."


Unlike other teams, this new team will not be formed with the existing members.

First, they will hold an audition all over Japan in the 47 prefectures which will be led by TV stations in each prefecture. Then, one delegate from each prefecture (47 girls in total) will be selected, and finally, the Team 8 members will be chosen among the 47 girls.

Up until now, AKB48 is known for their concept of "idols you can meet", however, Team 8 will have a new concept which is "idols that go to see you."

Team 8's activities to "go see you" will be fully supported by TOYOTA.

The application reception for the audition starts on the 24th, and it will end on February 23. Then the formation of Team 8 will be in the end of March.

MAN WITH A MISSION Kamikaze Boy's activities suspended after reported to be in an adulterous relationship
3 days ago   0   1,155