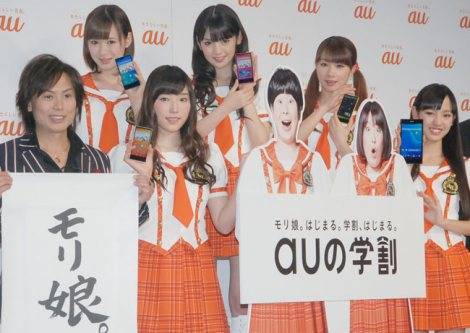 On January 22, idol group Morning Musume '14 and their producer Tsunku? who have been appointed as au's student discount campaign characters, made appearances for the "au release conference 2014 Spring."

During the conference, it was announced that they would form a new idol unit "Morimusu" along with female comedy trio Morisanchu's Oshima Miyuki and Kurosawa Kazuko who have been serving as the CM character for au. (One more member of Morisanchu, Murakami Tomoko is not included as she would be taking her maternity leave soon.)

Tsunku?, who previously revealed that there would be an important announcement about Morning Musume '14, made a comment, "In order for Morning Musume '14 to become the most powerful group, I decided to form a new unit."

The leader of Morning Musume '14, Michishige Sayumi said, "We just changed our name to 'Morning Musume '14' this year, and now we are forming a new unit. I am bewildered honestly.", and other members also followed her saying, "This is surprising as it's too sudden." and "Unacceptable."

Regardless of the members' opposition, Tsunku? revealed, "I am also thinking about releasing a CD. The choreography and the song are almost complete. I am creating a formation dance including Morisanchu." Hearing that, Mischishige said passionately, "I can never let them take the center position!"

The new CM starring Morimusu will begin airing on January 24.

At the conference, Aikawa Sho, Goriki Ayame, and Fukushi Sota also made an appearance.