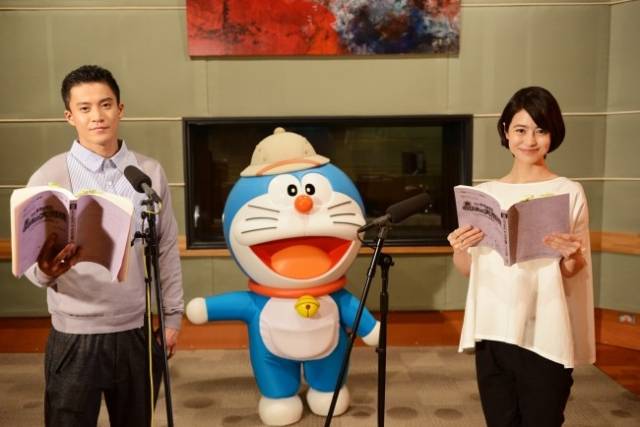 It was announced that actor Oguri Shun and talent Natsume Miku will lend their voices as guests for the latest Doraemon movie "Doraemon: Shin Nobita no Daimakyou ~Peko to 5-nin no Tankentai~".

This will be Oguri's second participation in a movie. He had previously made a cameo in "Doraemon: Nobita and the Island of Miracles" as "Amaguri Shun". This time, Oguri will voice Saber, a famous swordsman close to the villain Daburander from the kingdom of dogs "Bow-Wanko Kingdom".

Oguri commented, " 'Nobita no Daimakyou' which aired in 1982 was my favorite movie among all the Doraemon movies, and I thought I would be a cameo like Amaguri Shun last time, but I got to act as an actual character so I am really happy." As for the voice recording, he said, "I haven't really played a villain with my voice before so I had fun with it."

On the other hand, this will be the first time talent Natsume participates as a voice actress. "I was surprised, but I am really happy. When I was a kid, we would go as a family to watch the movies. To be part of it is really a wonderful thing." As she will play the heroine, the princess of the kingdom of dogs "Bow-Wanko Kingdom", she also spoke about her time in the studio, "I took longer than I was expected to, but it was a great experience."

As the 80th anniversary celebratory film for Fujiko F. Fujio, "Doraemon: Shin Nobita no Daimakyou ~Peko to 5-nin no Tankentai~" is a remake of his masterpiece "Nobita no Daimakyou" (1982). The film will open nationwide on March 8.