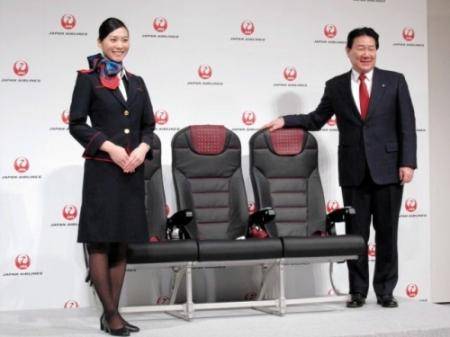 On January 30, Japan Airlines held its press conference for "new products and services in domestic flights" introducing its new services starting in May.

At the press conference, Arashi's Ohno Satoshi attended the event as Arashi is the image character for JAL. He promoted the new products in a "mature atmosphere".

Starting in May, all the seats including those in Economy class will have new leather seats and the lighting in the plane will be LED. Furthermore, there will be WIFI service in all flights from July onwards. Ohno, who tried out the news seats, said, "It feels really luxurious. The seats will fit you very well. It's great."

The Arashi CM for JAL will go on air starting February 7. All members of Arashi will be smartly suited up like businessmen to introduce the new JAL plane upgrades. Ohno commented, "There aren't really any CM in which all of us look so grown-up, so I hope everyone can look forward to that. Even I feel much more straightened up than usual."