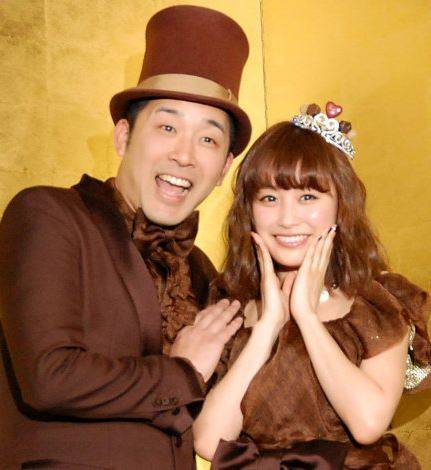 On February 14, talento Takahashi Ai and comedian Abe Koji held a press conference about their marriage at Yokohama Marine Tower.

When asked about their plans for starting a family, Takahashi responded, "We haven't thought about it yet. But in the future, three [children]!" As the former leader of Morning Musume, she shared that if she had a daughter, she would want her to join the group in the future. She laughed as she said, "I came out to Tokyo from the countryside, so I faced homesickness and many other difficulties. However, I am planning on living in the Kanto region, so I don't have to worry about that. I'm sure there will be hardships, but I hope she will be able to join in the future. Although that's something Tsunku?-san decides."

Takahashi has recently been in touch with former Morning Musume members who have gotten married or had children. "I've received a lot of advice from Fujimoto Miki-chan. Also, Nakazawa Yuko-san contacted me saying, 'Today is possibly the last night you're going to be single.' Everyone is watching over me warmly."

Takahashi and Abe registered their marriage today, February 14. Abe revealed that they went to greet Tsunku? and that he "received positive remarks." Takahashi also reflected, "He really took care of me. Tsunku?-san and I talked about how he also had comedian friends."

Abe also shared his thoughts on when their relationship was first disclosed. "There were things to consider. Wherever we go or wherever we appear, we will be criticized [by the press]. It was rather scary." He continued, "However, after we announced our engagement, we weren't criticized or lashed at, we were given blessings by people of the same sex and of the opposite sex."