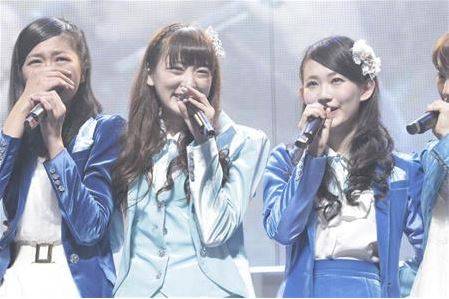 Yasaka, who aims to become a musical actress, performed 23 songs with 10 members including their new leader Shimura Rika. "I will forever take pride in SUPER?GiRLS who are always positive no matter what happens, as well as the fans who have supported me," she expressed as she exchanged hugs with the members in tears.

During the double encore, the newly-born SUPER?GiRLS with the addition of Asakawa Nana, Uchimura Risa, and Watanabe Koume, performed their new song "Hanamichi!! ~Ambitious~" (May 14th release) for the very first time.