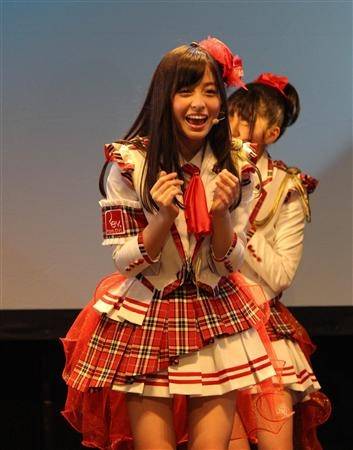 Fukuoka-based dance and vocal unit Rev. from DVL which Hashimoto Kanna (15) belongs, will be making their major debut.

On March 1, 2014, during a live performance in her hometown Fukuoka City's DRUM LOGOS, she suddenly announced that she will be making a major debut with the single "LOVE - a r i g a t o u - " on April 16.

Last November, the group's live performance video was uploaded to video streaming site Youtube and Hashimoto and caught much attention due to her "angel-like" smile. She then became a hot topic on the internet which caused her agency's official site to crash.

Hashimoto commented that she wants to color the whole country with 'Rev-color' as well as revealing her goals of appearing on NHK Kohaku Uta Gassen in 2 or 3 years.

Furthermore, the rising idol also threw the opening pitch for Softbank and Lotte at the Fukuoka Dome on February 28. Hashimoto, a Softbank fan, said excitedly at the time, "After the opening pitch, I would like to stay and finish watching the match!".