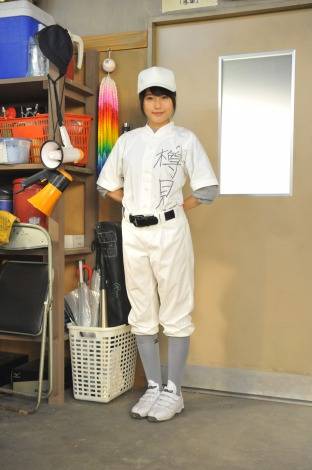 Actress Arimura Kasumi who is currently starring in NTV's latest drama "Yowakutemo Katemasu" has recently transformed from being the baseball club manager to a baseball player.

Arimura, clad in a uniform with her character's name written on it, commented, "Even though this is only for practice, I feel great in this uniform." She added, "I am determined to participate in a game. I won't show off my girly side anymore."

In order to become a baseball player, Arimura took part in practices and muscle training, "Everyone told me that I got better at ball-catching everyday!", the actress commented happily. She has also learned the posture for throwing pitches, and her ball is now able to reach the catcher. "I want to be a comrade to the teammates. I think an enthusiastic manager like this is great. It feels like I am part of the fight. I hope those who watch the drama will feel the same." 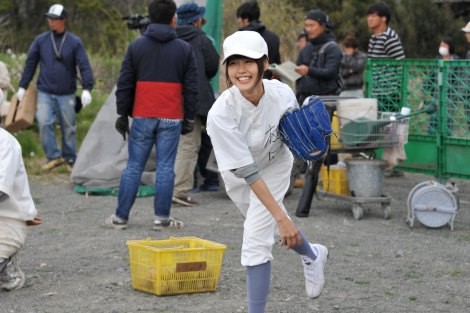 The hot-blooded drama centers around Tamo Aoshi, the teacher and baseball coach played by Arashi' Ninomiya Kazunari, who finds ways to bring his baseball team, lacking in everything from skill, stamina, determination and equipment, to Koshien, Japan's national high school baseball championship.

In the 3rd episode aired on April 24, Arimura's character Yuzuko becomes upset at the baseball club members' incapability to play baseball well, and whilst hoping to fulfill her deceased father's wish to see her play baseball, declares that she will become a player herself.