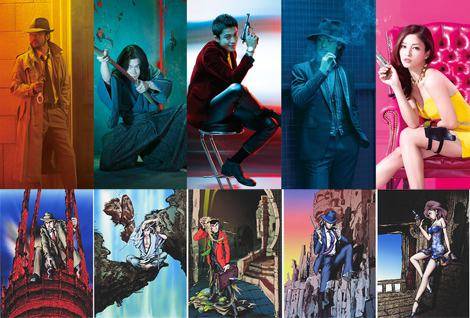 As previously announced, a live-action film adaptation of "Lupin the Third" will be released starring Oguri Shun, and recently, the character visual art of the main cast for the movie was revealed.

In the movie, Oguri plays the protagonist Lupin, while Tamayama Tetsuji plays Jigen Daisuke, Ayano Go plays Ishikawa Goemon, Kuroki Meisa plays Mine Fujiko, and Asano Tadanobu plays Zenigata Koichi, the inspector. And as you can see, the main cast members look as if they jumped out of the original comic.

While being true to the original, this live-action film adaptation adds some new story lines.The movie will show how Lupin and the others encounter each other, and how Lupin  and his fellows become a team.

The story depicts their attempt at "Crimson Heart of Cleopatra", the treasure that allows its owner to control the world, and "Navarone's Ark", the giant stronghold that houses the treasure.

Live-action movie "Lupin the Third" is scheduled to be released on August 30.

JO1's will provide the opening of the anime 『Gunjou no Fanfare』, and main vocalists Yonashiro Sho & Kono ﻿Junki﻿ collaborate with Hiroyuki Sawano [nZk] for the ending
9 hours ago   0   49