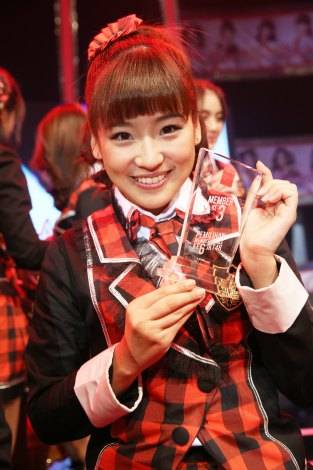 AKB48's Indonesian sister group JKT48 held its first ever "JKT48 General Election" to decide on the Senbatsu members for their 6th single.

The results of the elections was revealed on April 26, in Jakarta, Indonesia. The only Japanese candidate in JKT48, Nakagawa Haruka (22) placed 3rd with a total of 13,276 votes.

This is the first time for AKB48's overseas sister group to hold the general election.

Nakagawa placed 14th during the intermediate results revealed on March 26, but was able to pick up pace and ended up in 3rd place.

She thanked her fans, "Thanks to everyone, I was able to get 3rd place." Nakagawa has also submitted her name for this year's AKB48 6th Senbatsu General Election.