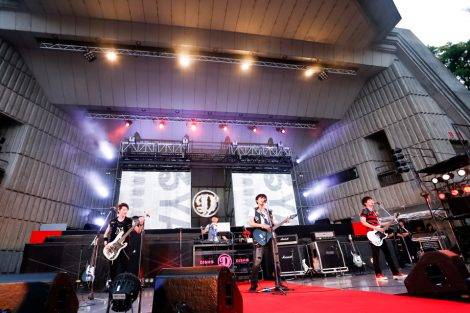 On May 11, 4-member dance rock band DISH// held a solo live concert at Hibiya Open-Air Concert Hall, Tokyo, and it was announced that the group will hold their first live concert at the Nippon Budokan on New Year's Day of 2015.

When they finished their 2 encore performances. Sony Music Labels CEO Muramatsu Shunsuke showed up on the stage and made the announcement. It was a surprise announcement even for the members as some started crying.

DISH// made their major debut last June as the "younger brother" group of Momoiro Clover Z. It's consisted of TAKUMI (Vo&G), MASAKI (G), RYUJI (B), and To-i (DJ).

They are scheduled to release their first double A-side single "Saisho no Koi ~Motetakute~ / FLAME" on June 25.