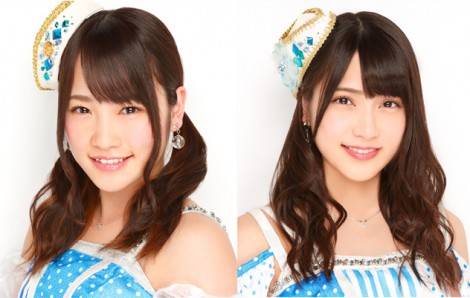 On May 27, AKB48 members Kawaeri Rina and Iriyama Anna, who got injured during the group's handshake event in Iwate on May 25, updated their Google+ and messaged to their fans.

Kawaei wrote with her photo, "I'm sorry everyone for worrying you. I am recovering well little by little (^^)." She also revealed that she would make an appearance via telephone on Fuji TV's live broadcasting show "Viking", which she serves as the regular member for Wednesdays, for May 28th' broadcast. (Kawaei's Google+)

Iriyama also updated her Google+ on the same day with her smiling photo, "Everyone, I am sorry for causing so many worries this time. Though I fractured and got some slashes, I received stitches at a hospital in Iwate, and I returned to Tokyo yesterday. Currently, I am in a calm environment and living quietly. I am able to smile everyday! The support and encouragement from you all are helping me a lot. I hope I could show you myself looking cheerful soon. Please wait for me (^o^)?." (Iriyama's Google+)

Not only AKB48 and its sister groups, but other idol groups' events are also being postponed or canceled.

HKT48 member Moriyasu Madoka also revealed via her Google+ that there was a meeting for all the members and their family members, which was to explain them for the current and future situation.

It was also announced Idoling!!! canceled the release event for their new single and handshake event scheduled on the 28th due to advice from the police, and Shiritsu Ebisu Chuugaku canceled their handshake event, which was planned for the 31st after their public radio event.

On the other hand, Hello! Project announced that they would hold events as planned with even more tightened security.

Twice Wows While Continuing to Perfect Their Elegant/Mature Concept in New Release "Kura Kura"
1 day ago   0   2,655