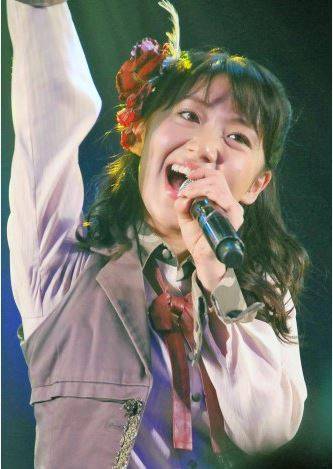 On May 13, AKB48 announced through their official blog that Oshima Yuko's graduation performance has been changed from June 2 to June 9.

Originally, Oshima had planned to graduate at AKB48 Theater on June 2 after holding various events such as her graduation ceremony in March at National Olympic Stadium and her Kanshasai.

However, her graduation ceremony at National Olympic Stadium was canceled due to stormy weather. The make-up for this event was later scheduled to June 8 at Ajinomoto Stadium, which is the day after the General Elections. Because the ceremony was pushed after her graduation performance, the date was changed to June 9. As originally planned, Oshima will part ways with AKB48 at the Theater.

Although all the dates have been set, the current weather forecast for the make-up performance on June 8 is "rain and thunderstorms." Since it will be held outdoors, AKB48 is asking their fans to make "teru teru bozu" to pray for good weather.