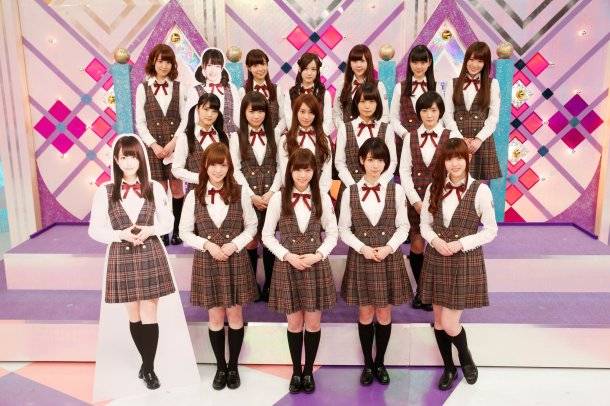 On the May 11 broadcast of TV Tokyo's late-night program 'Nogizaka tte, Doko?', the senbatsu members for Nogizaka46's 9th single was announced.

Nogizaka46's last single "Kizuitara Kataomoi" featured Nishino Nanase as the center and became the group's best-selling single. Their upcoming 9th single is slated for release on July 9. It has already been receiving attention after regular senbatsu member Ikuta Erika had announced that she will not be participating in the single in order to focus on her studies.

For this single, there will be 5 members in the front row, 5 in the middle, and 7 in the back. The "fukujin" members, who will receive a lot of media exposure, has increased from 5 to 10. The front and middle rows will make up the "juu fukujin" (ten deities).

Nishino will continue to serve as center for the upcoming single. She commented, "I never thought that I would be center twice. All my activities for the 8th single, I did it while thinking that it would be my only time. When I was really uneasy, I was able to overcome it with the support of the members, my family, and fans." She continued to express, "Everything related to the 8th single, I was able to do it without regrets. The most scariest thing is that I am going to be the center for the next single... When it comes to the 2nd time, I feel that fans will look at me more strictly, so I'm really scared. I'm worried..."

In addition, Matsui Rena, who holds a concurrent position in SKE48 and Nogizaka46, has also been chosen as the senbatsu and "juu fukujin" member. Although she wasn't able to appear on the show, she commented, "On 'Nogi Doko', there are always projects where they pray for hits [of the single]. They stand under the waterfall, and the last time, they went bungee jumping. Everyone looks like they're having so much fun. I want to try something like that, so as a member of Nogizaka46, I want to participate in those kinds of things."

Other senbatsu members include Eto Misa, Inoue Sayuri, Saito Yuuri, Hoshino Minami, and Yamato Rina. For Yamato, this will be her first time entering the senbatsu. This will be Eto's first senbatsu since their 7th single "Barette", and this will be Inoue, Saito, and Hoshino's first since their 6th single "Girls Rule".