BABYMETAL to join 'Lady Gaga's artRAVE: the ARTPOP ball' as supporting act + 1st one-man live in the US 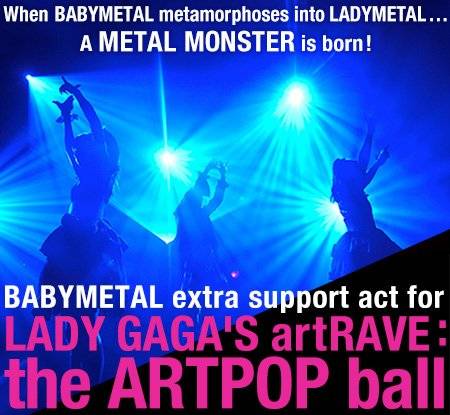 It was announced that BABYMETAL would join "LADY GAGA'S artRAVE: the ARTPOP ball" performances in America as a supporing act.

On a side note, because of BABYMETAL's participation on Lady Gaga's tour, it was also announced that YUIMETAL (Mizuno Yui) and MOAMETAL (Kikuchi Moa) would not be appearing in the "Tokyo Idol Festival 2014" (to be held on August 2nd & 3rd) which they were scheduled to appear as Sakura Gakuin members.

Additionally, BABYMETAL will also hold their 1st one-man live in the U.S. at The Fonda Theater in Los Angeles, California on July 27.

You can check the updated schedule for BABYMETAL's first world tour below.

Source & Image: natalie
Thanks to The-doctor for the tip!