Masuwaka Tsubasa is a cute policewoman for a day 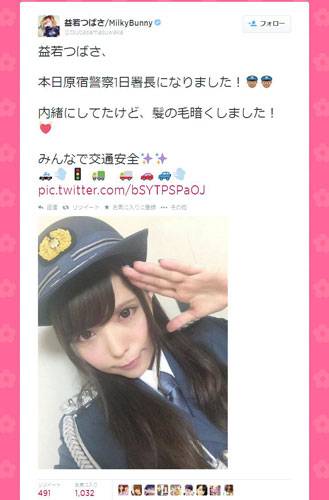 Model and talent Masuwaka Tsubasa (28) posted a picture of herself with black hair on Twitter.

It was later revealed that the talent had been a 1-day Division Leader at the Harajuku Police Station. She uploaded a picture of herself in a policewoman uniform with the caption, "I had kept this a secret, I dyed my hair dark!" This was a rare hair color for Masuwaka, a popular gyaru model, whose hair is usually light or with red or blue extensions.

Fans praised the model for her new look, "It's illegal to be this cute", "Black-haired Tsuu-san (Masuwaka's nickname), you're tickling this man's heart" and "What's with this angel?"