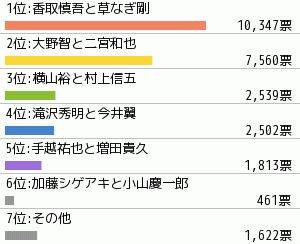 "Minna no Koe" is a mobile survey site powered by Docomo that allows fans to vote on a wide variety of topics. Data from the site is then selected to be featured on the popular ranking site "Goo Ranking".

26,844 fans in Japan were surveyed on which pair of Johnny's talents they consider to be best friends with each other and the results are as follows:

Do you agree with the ranking? Who do you think are best friends in Johnny's?