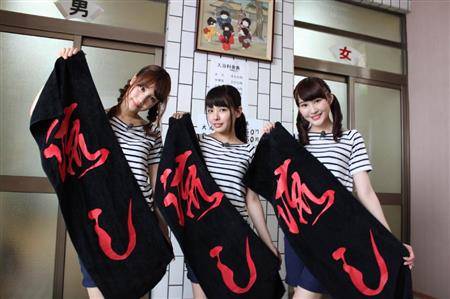 Details on NMB48's newest variety show on KTV, which will begin airing on July 8, titled "NMB no Meccha Baito" (Tuesdays 1am), have been announced. The show will feature various members of the idol group taking on odd part-time jobs.

In the first episode, members Yamada Nana (22), Takano Yui (20) and Kawakami Rena (18) will work at a public bath. On top of cleaning the baths and lockers before the shop opens, they will also help wash the customers' backs. Yamada commented, "It was fun to talk to the customers. There are a lot of things I wanted to ask the grandpa about, and it made me want to wash my own grandfather's back."

In the next episode, Kadowaki Kanako (17), Kusaka Konomi (18) and Ichikawa Miori (20) will take on part-time jobs as plasterers (people who plaster on walls). Kansai TV says that it will continue to entertain fans with "un-idol-like" part-time jobs in the weeks to come.

NMB48 has a lot of younger members compared to the other sister groups. Yamada, who took part in the pilot episode of the program, is in fact the oldest original member of the group. She gave 3rd generation member and middle-schooler Yabushita Shu (15) as an example, "She has never earned money on her own, so I want them to give her something to do." Kawakami also added, "Yeah, a lot of people call [Shu] a bratty kid, so I want her to be challenged with some hard work."

Yabushita is known for her comedic antics in which she would speak candidly and refute her seniors such as NMB48's ace Yamamoto Sayaka (20). It seems like now her seniors want to "teach her a lesson" through this program. "She needs to learn to communicate with people...how about nanny, or babysitter? I think that'd be great!" Yamada, Takano and Kamikawa suggested.