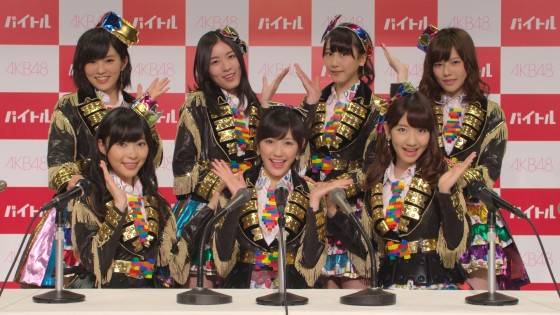 Recruitment site "Baitoru" has a new job posting from none other than popular idol group AKB48!

"Baito AKB" is searching for a part-time member to join the group's ranks as part of a collaboration between AKB48 and Baitoru. The part-time member will be paid 1000 yen an hour, and her duties will include performing at concerts, attending handshake events, and appearing on TV and in commercials.

This new 'job opening' was announced at the "Baitoru AKB48 Special Live ~ Baitoru no Hi Natsu Matsuri ~" on August 10. It was also announced through the new Baitoru CM "Baito AKB Recruitment Notice" revealed on August 11. AKB48 members, aside from the new 'Kami 7' (Watanabe Mayu, Sashihara Rino, Kashiwagi Yuki, Matsui Jurina, Matsui Rena, Yamamoto Sayaka, Shimazaki Haruka) who appeared in the CM, were not aware of this new job opening.

Below are the details on "Baito AKB":

Period: Until end of February, 2015. Contract renewable for  3 months after
Other benefits: Insurance, transportation allowance, costumes, food allowance provided.
Qualifications: No experience required. Female above middle school who does not belong to any talent agency
How to apply: Via web forms or by mail
Application period: 8/10/2014~9/10/2014 (midnight)
Application process: 1 elimination round (application), 1 interview (audition), final round (audition)

SixTONES's new song to be used in Japanese-dubbed version of movie 'Spiderman: No Way Home'
4 hours ago   0   165