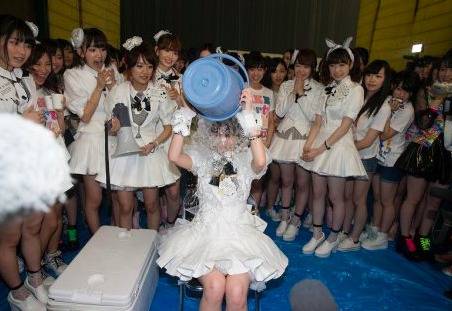 A video of Akimoto Yasushi taking on the ALS ice bucket challenge was uploaded onto AKB48's YouTube channel on August 20.

Akimoto, who was nominated by Gentosha Inc. president Kenjou Toru, boldly accepted the challenge. It took place after the group's 3-day concert at Tokyo Dome. Members Takahashi Minami and Sashihara Rino assisted in dumping a bucket of ice water over his head. "I support the ALS ice bucket challenge," he stated.

Shortly after, Watanabe Mayu volunteered to do the ice bucket challenge as a representative of the members. She called out, "Here I go!", and poured the ice water over herself.