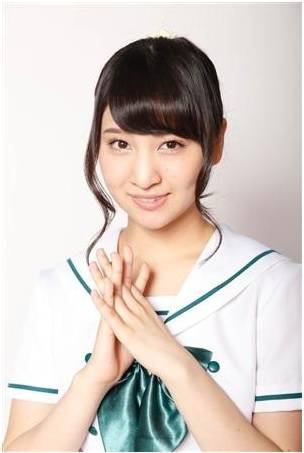 Former SKE48 research student turned actress Imade Mai (21) is playing the role of a wicked girl for the stage play "Eden no Sora ni Furiyuku Hoshi Uta" (runs until August 17.) The play is running at the Rikkoukai Hall in Kitashinagawa, Tokyo and it is Imade's first ever role as a wicked girl.

The play is set in the cosmos and tells the story of girls and androids living aboard a spaceship; Imade plays a willful and violently tempered female high school student.

While she shows off her sharp dance skills in the play, she expressed her desire for her role with, "I always wanted to play the role of a wicked character, so I am enjoying it so much. I hope that the audience will hate my character to the extent that they can hate."

Imade also did PR for the play with, "Why is a stage play set in space, and what is the purpose for it?  Well, once you see it, you will quickly see how it answers the question and feel that it is a great piece."