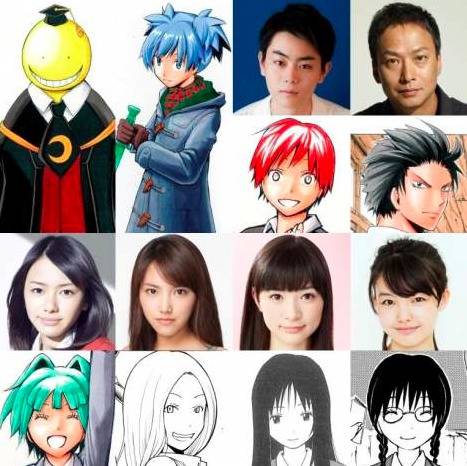 The protagonist 'Shiota Nagisa' will be played by Hey! Say! JUMP's Yamada Ryosuke, who's starring in a film for the first time. Yamada, who claims to be a regular reader of the manga series, expressed, "I was surprised that it would be made into a movie. When I heard that I would be starring in it, I couldn't conceal my surprise. In order for both fans of the original manga and those who haven't read it yet to enjoy it, I want to do my best to face the class with Korosensei."

A strange creature, known as Korosensei, gives a warning that it will destroy the Earth in one year. The creature proposes to the government that it become the homeroom teacher of Kunugigaoka Junior High School's class 3-E. In order to save Earth, the students of 3-E are assigned by the government to assassinate Korosensei. The story unfolds as the students look for ways to assassinate their teacher.

The students of class 3-E will be played by Suda Masaki, Yamamoto Maika, Taketomi Seika, Yuki Mio, and Uehara Miku. 'Karasuma sensei', who supports the students in their assassination plan, will be played by Shiina Kippei. He commented, "My impression of the original manga was that I was surprised at how anybody could produce such a bizarre story. It seemed that behind the humor, it was sounding the alarm of what the image of present day teachers should be. I'm looking forward to working with the young actors."

The fim will be directed by Hasumi Eiichiro, who is known for his work in the 'Umizaru' series and the 'MOZU' series. The 'Umizaru' team will get back together to work on the film. Currently, an open set is being built at a closed school in the suburbs of Kanto. Filming is scheduled to begin on August 31.

Manga artist Matsui Yusei showed his expectations for the film, saying, "I was amazed by the gorgeous cast line-up. Moreover, the CG of Korosensei was beyond my expectations. There was a lot of time and cost put into making it. I'm already excited to see what splendid human beings and expensive tentacles (Korosensei) can produce."