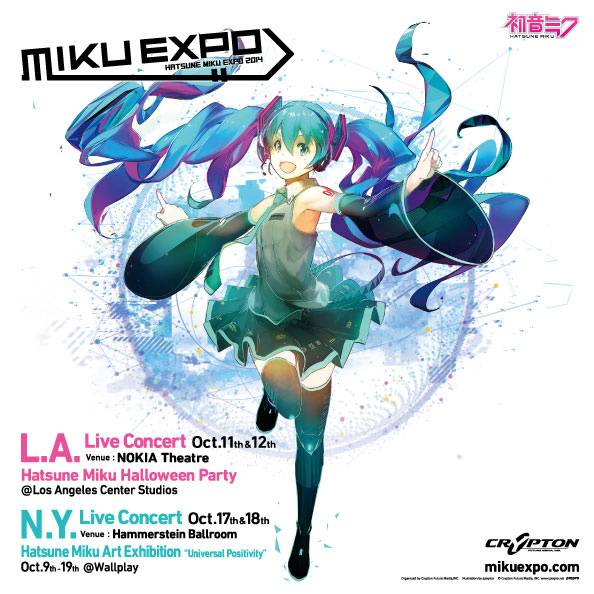 The official theme song for HATSUNE MIKU EXPO 2014 has been released.

"Sharing The World" by BIGHEAD feat. Hatsune Miku gets fans worldwide pumped up for the back-to-back Miku Expo events in Los Angeles and New York with a high-energy beat and uplifting, empowering lyrics. There's no one better than Hatsune Miku to proclaim "The future is right now!"

"Sharing The World" will be released on iTunes from KARENT label on August 31st.

HATSUNE MIKU EXPO celebrates the music, imagery, and interactive excitement of the virtual singer Hatsune Miku. With back-to-back events in the 2 largest cities in America this October, this is a once-in-a-lifetime chance for fans to immerse themselves in the Miku World!

Tickets are on sale now for the HATSUNE MIKU EXPO which features live concerts using the state-of-the-art projection technology that brings Hatsune Miku to life in stunning 3D.

Ticket and Event Information at the MIKU EXPO Official Website:

LOS ANGELES - The HATSUNE MIKU live concert is being hosted in Los Angeles' Nokia Theatre with the collaborative exhibition hosted by Miku and her friends at an early Halloween party at Los Angeles Center Studios. At the exhibition, you can enjoy artwork displays, a special Halloween-themed area, and a shop where you can buy exclusive goods, including special Halloween items!

NEW YORK - The HATSUNE MIKU live concert is being held in New York's Hammerstein Ballroom, and the exhibition will be hosted in the Lower East Side concept space Wallplay over a period of eleven days. The exhibition shows illustrations, videos, and more, revolving around Hatsune Miku and the theme of Universal Positivity.

SixTONES's new song to be used in Japanese-dubbed version of movie 'Spiderman: No Way Home'
3 days ago   0   556