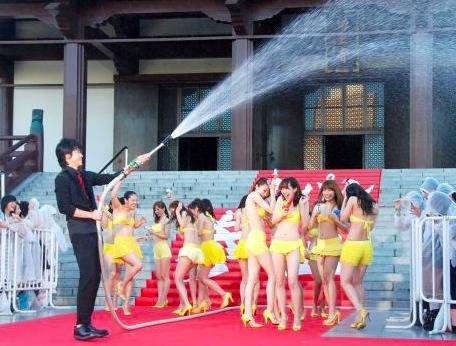 On August 19, actor Oguri Shun attended an event for his movie 'Lupin III' (August 30 release), where he sprayed water all over a group of women.

The event was held to pray for the movie's success and to enjoy a cool, summer evening. In order for the 300 event attendees to cool off, Oguri brought along 14 beautiful women in yellow bikinis and sprayed them with a hose.

Oguri seemed to be satisfied with the small surprise as he stated, "That felt good." Upon hearing that the surrounding temperature went down 2 degrees from 35 degrees Celsius (95 degrees Fahrenheit), Oguri said in a Lupin-like manner, "I stole it (the heat)."

Before the event, Oguri prayed for the movie to be a big hit. "The prayer went well, so I'm prepared," he commented. He also promoted the movie, saying, "It's a large-scale film, so please enjoy it at the movie theater."

Besides Oguri, director Kitamura Ryuhei was also present at the event.