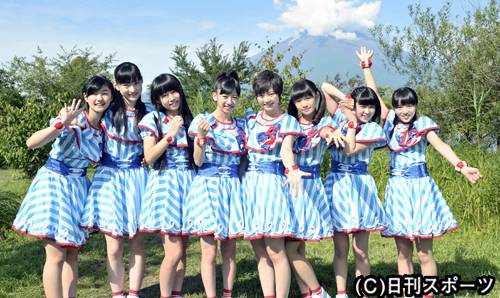 During the concert, they announced that the group will be performing in two major arenas in Kanto and Kansai in November.

During the event, text announcing the events appeared on the water screen. It was announced that the group will perform at the Yokohama Arena in Kanagawa on November 3rd and the Kobe World Memorial Hall on Hyogo on November 8th. Member Mayama Rika (17) commented, "It is because of your support that we are here today. Thank you everyone." As if to congratulate the idols, the concert followed with fireworks.

Shiritsu Ebisu Chuugaku's largest event to date was their concert in Saitama Super Arena which housed 10,000 fans. This time, they will perform for a crowd of 12,000 fans at the Yokohama Arena. Their new addition Hoshina Mirei (16) who just joined this year commented, "We will become the stars of Kanagawa!" and expressed her happiness at being able to perform in her hometown.

This is the group's 2nd time holding an outdoor concert. The group charmed 6000 fans with 24 songs including their latest single "Butterfly Effect", which reached 3rd place on the Oricon Weekly Chart.