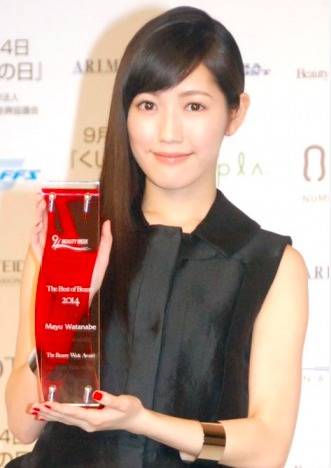 On September 3, AKB48's Watanabe Mayu attended an award ceremony for 'THE BEAUTY WEEK AWARD 2014' as the winner of the long hair style category.

After the event, Watanabe met with reporters for an interview and was asked when fellow member Kojima Haruna will graduate. "I don't even know as a member. I'm even nervous myself," she responded.

As the group's eldest member, Kojima has been predicted as the next member to graduate. However, she has declared many times, "I won't graduate!", during the General Election and the group's Tokyo Dome concert, as well as on various radio programs. At a recent event, graduated member Itano Tomomi showed her concern about Kojima graduating, "I'm expecting a graduation announcement like never before. Like coming down from the sky. I'm expecting a lot out of Haruna."

'THE BEAUTY WEEK AWARD' is given to celebrities whose hair style has gathered a lot of attention. On this day, Watanabe appeared at the awards ceremony wearing a sophisticated dress with her long, black hair flowing over her shoulder. She mentioned that this is her first time receiving a personal award, "Am I good enough for this award? I was surprised." Regarding hair styles that she wants to try out, she stated, "I want to go blonde!"