Kashiwagi Yuki to play a hostess in drama 'Kurofuku Monogatari' 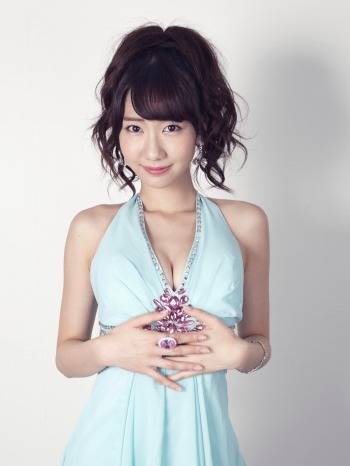 AKB48's Kashiwagi Yuki will be making a regular appearance on TV Asahi's upcoming drama 'Kurofuku Monogatari' as a hostess.

While Kashiwagi has been extremely busy with her concurrent position in NMB48, she commented on her new challenge, "I am usually surrounded by many girls in AKB48, but I think the night life of a woman has a different atmosphere, so I want to play my part and enjoy it."

The drama is based on Kurashiona Ryo's manga of the same title. Its story revolves around 'Ogawa Akira' (played by Sexy Zone's Nakajima Kento), a young man who fails the entrance exam for medical school multiple times. He begins working for an Ikebukuro hostess club named 'Juliet' as a black-suited staff member.

Kashiwagi will play 'Miki', a proud, selfish, and troublemaking hostess who has the habit of coming into work late and being absent from work without permission. She falls in love with 'Akira', but he is head over heels for the club's top hostess 'Kyoko' (played by Sasaki Nozomi), creating a complicated love triangle between the three characters.

"It's a role that I will hardly get to experience, so I'm excited to be able to get a little experience of that world. I want to do my best by learning a lot about the rules, behaviors, and attitudes of night life," said Kashiwagi. "Please pay attention to the troublemaker Miki and how she changes after meeting Akira as well as what happens to the relationship between Miki, Akira, and Kyoko!"

Besides Nakajima, the other black-suited staff members will be played by Yamamoto Yusuke, Nakao Akiyoshi, and Johnny's Jr.'s Yasui Kentaro. Kurokawa Tomoka will play 'Ayano', a hostess who brings dissonance to the club. Akira's father will be played by Jinbo Satoshi, Juliet's owner 'Kanzaki Mamoru' by Kitamura Yukiya, Juliet's store manager 'Saito' by Takenaka Naoto, and 'Tamaki', the black-suit chief of a long-established hostess club called 'Delicious', by Kaname Jun.