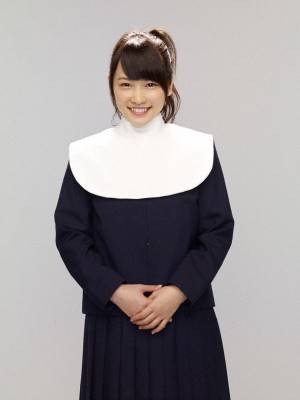 It's been revealed that AKB48 member Kawaei Rina will be appearing in the TBS drama 'Gomen ne Seishun!' premiering on October 12.

'Gomen ne Seishun!' is a school drama starring Kanjani8's Nishikido Ryo. Kawaei will appear as one of the students at a strict all-girls Catholic school where 'Hachiya Risa' (played by Mitsushima Hikari) works. She will play 'Jinbo Ai', a Christian who is strong in faith although she appears to be the gaudy one among other students.

Kawaei commented, "I am nervous about a lot of things like wearing clergy attire and going to the set for the first time, but I will do my best not to lose to the other actresses!" This is Kawaei's second time appearing in a drama independently.