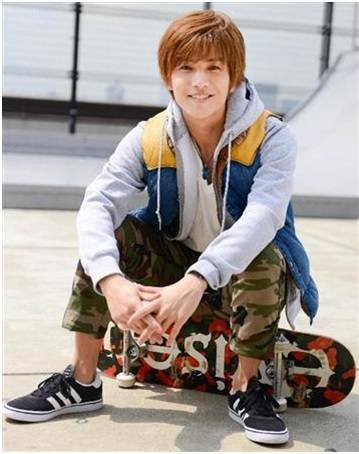 On September 11, it was announced that Iwata Takanori (25), EXILE's newest member and member of Sandaime J Soul Brothers from EXILE TRIBE, will appear in the Fuji TV serial drama "Dear Sister". The drama will start airing on October 16 and run on Thursdays at 10 PM; this is Iwata's first ever serial drama.

In April, he joined EXILE through a performer audition. He will be on tour with EXILE TRIBE and concurrently film for the drama through the end of the year. He stated vigorously, "While I will not have much time to sleep, I will use all of my strength and energy to take on this challenge and do my best."

The drama is a romantic comedy that showcases the contrasting personalities of two sisters played by actresses Ishihara Satomi (27) and Matsushita Nao (29). Iwata, who plays Eito, a pro-skateboarder hopeful, who has unrequited love with the ingenuous younger sister Misaki (played by Ishihara), spoke about the role saying, "I hope I can make it my own." He also spoke about EXILE's AKIRA (33), who is his senior and also an actor, sharing, "I would like to follow in his footsteps. I would like to be both an actor and performer."