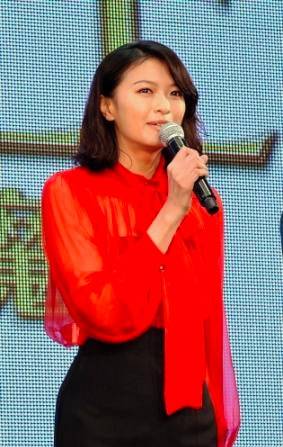 On October 27, the world premiere of Arashi member Aiba Masaki's starring film 'MIRACLE Debikuro-kun no Koi to Mahou' (to open in theaters on November 22) was held at 'The 27th Tokyo International Film Festival'.

The film was directed by Inudo Isshin, who Aiba and the members of Arashi previously worked with in the 2007 movie 'Kiiroi Namida'. It's a love story based on Nakamura Ko's novel 'Debikuro-kun no Koi to Mahou', which uses Yamashita Tatsuro's masterpiece "Christmas Eve" as its motif.

During the event, it was announced that the movie will be released in South Korea, Taiwan, and Hong Kong sometime next year. Aiba expressed, "Isn't it amazing? It hasn't even been released in Japan yet." Meanwhile, Eikura Nana, who plays the protagonist Hikaru's (Aiba) childhood friend, commented on co-starring with Aiba, "There's a scene where we hold hands. I thought my hand was going to break [because he held it so tightly], but I was so nervous that I couldn't say anything."

The film also stars Korean actress Han Hyo-joo as a world-famous lighting designer who Hikaru accidentally encounters. In addition, Ikuta Toma plays the role of a manga artist who was Hikaru's classmate during his college days.